2018 Battle in the bahamas has been canceled

In the best interest of EKFT, and the anglers we regret to inform you that the 2018 Battle in the Bahamas has been canceled.On the Kayak Fishing RAW podcast we talk about it. Check it out below. 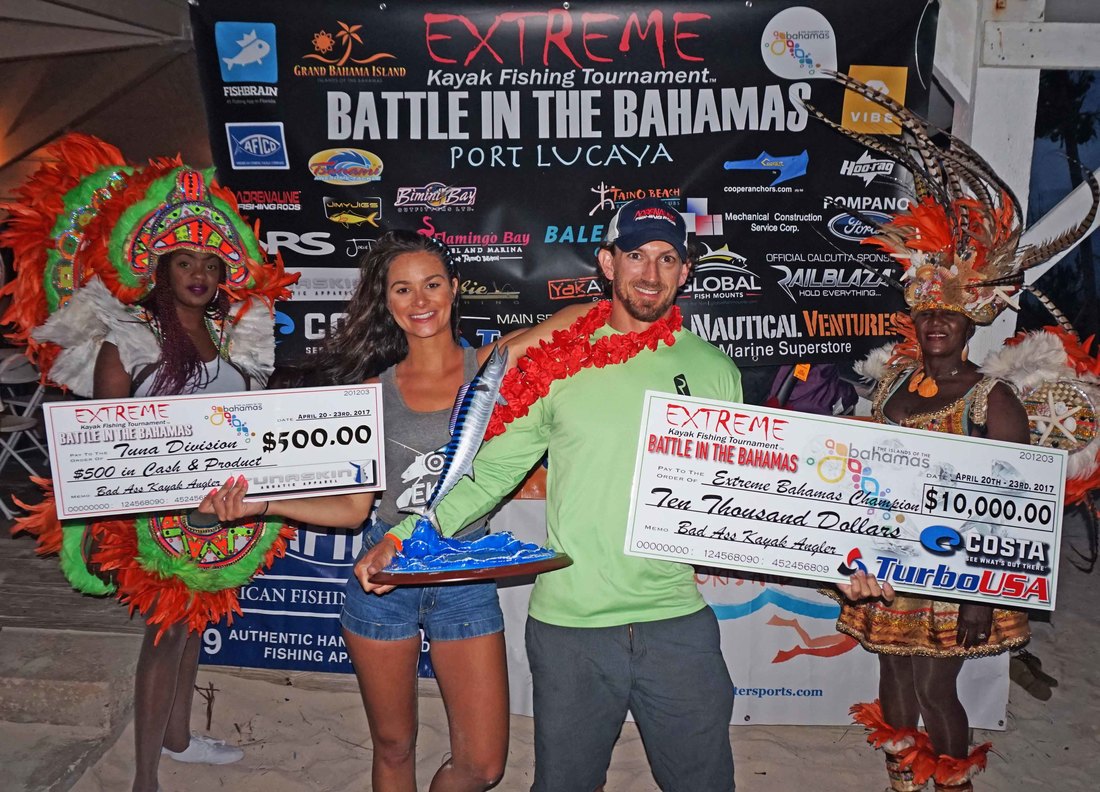 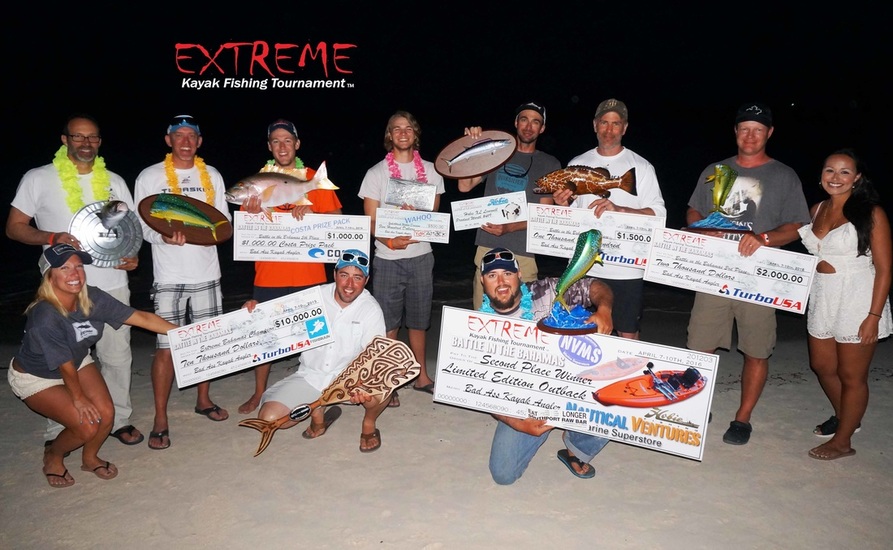 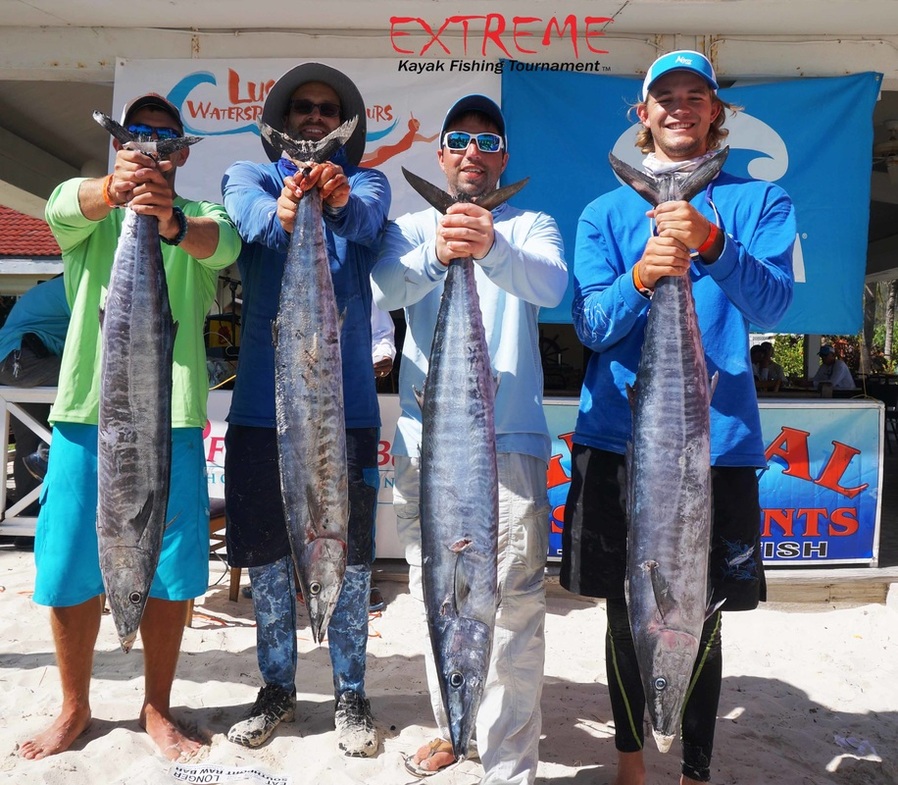 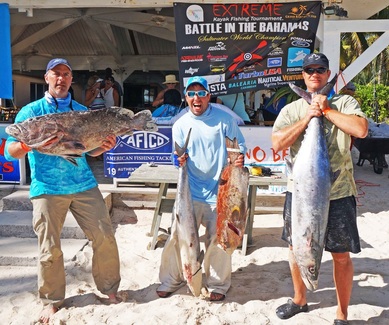 PORT LUCAYA, BAHAMAS (April 9, 2016) – Crazy. The Extreme Kayak Fishing (EKF) Battle in the Bahamas spun silly.  A Canadian cracked a tropical record, a first-timer cranked up a convincingly strong finish, and the series-best grouper mark was shattered by a saltwater virgin.

The Battle of the Bahamas is itself unlikely. For the third consecutive year fifty anglers packed their fishing kayaks onto the Balearia Caribbean ferry out of Port Everglades, Florida. Four hours later they arrived on Grand Bahama, in another country, one that feels a world away. The water is vibrant blue. Palms sprout from the white, pillowy sands. Only one outcome felt like an inevitability, achieved by an angler who could no longer be denied.
“I’ve finished second twice, third, fourth, and sixth. Last year I was in first after day one, and got my hopes up. I lost one tournament by one-tenth of a pound,” said EKF regular Joe Kraatz of Florida. He turned in a spectacular two-day 72.9-pound tally and finally claimed a tournament victory on the strength of late heroics both fishing days. But first, the foundation.
Kraatz set himself up for success by a one-drop stick of a 17.2-pound yellowfin grouper early on day one. He stuck out a deadly slow period, riding out a nasty, pervasive wind, and hooked up again with just 30 minutes left in the fishing day. The freight train blew right through the station, nearly spooling him before heartbreakingly busting him off.
He didn’t fret. He quickly tossed out another bait and bam! He was right back onto his kicker fish, a 30.4-pound kingfish, yet he wasn’t in the lead.

​First-time saltwater angler Nick Weber of Minnesota pinned a live goggleeye onto a jig and let the unconventional combo dangle. He hooked up and pried a 39.1-pound grouper out of the reef – the heaviest ever logged in EKF competition. That single fish held up well enough for an overall fourth place and $1,500.
Canadian Brian Arnold added to the mayhem when he brought a 40.2-pound kingfish to the scale – an impressive new EKF record for a series that has seen more than its share of big kings. It earned him third place and $2,000.
Kraatz didn’t look back. Luck played a role. He was rebaiting a hook when a mahi mahi swam by his kayak almost in touching range. He rushed his cast, seemingly crapping out when it splashed down three feet back. A 7.7-pound mahi hit it immediately. Finally, Kraatz picked up a 17.6-pound wahoo while drifting, completing his 72.9-pound total for a convincing win and a hefty $10,000 check.
Brandon Nodal of Florida scored 54.8 pounds to take second place in just his first EKF competition. Nodal, who focused on fishing the bottom, said he thought it would be easy. It wasn’t. “I got very few bites that counted. I made them count,” he said. Nodal won a Limited Edition Hobie Outback, just one of 500, valued at $3,400. 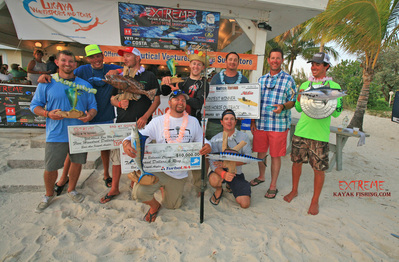 A new era in Extreme Kayak Fishing’s Battle in the Bahamas 2015 draws fishermen from all over the world living up to the name Saltwater World Championship.

Anglers from China, Canada, and all over the states came together to fish last week in the Extreme Kayak Fishing Battle in the Bahamas 2015. With live bait being hard to come by, the 60 anglers had to resort to old tactics from when Extreme Kayak Fishing first began…catching your own bait and using anything they can find to win the $10,000!

Extreme Kayak Fishing Tournament records were broken with Brian Nelli’s 13.9lb Mutton Snapper being the largest in Extremes history. Another big mutton weighed in by Rob Rodriguez hitting the scales at 12.1lbs. Extreme also had its largest Dolphin (Mahi-Mahi) caught in the series with a whopping weight of 29.3lbs by Adam Fisk. There were also multiple Wahoo’s, Blackfin Tuna, Grouper, and Kingfish caught in this international event.

Brian Nelli once again showed that he rules the Bahamas with a total weight of 43.2lbs. He won a beautiful custom Marlin Fish Mount Trophy from Global Fish Mounts, $10,000.00 from Turbo USA and FishBrain, an all-expense paid trip to China to compete in the China Open, and his second Extreme Champion Ring as well as an Adrenaline Fishing Custom Extreme Rod.

Adam Fisk wins 4th place catching the biggest Dolphin in Extremes history which weighed in at 29.3lbs. He won $500.00 from Turbo USA, Costa Glasses and a custom Dolphin trophy made by Global Fish Mounts.

This was truly a tournament to remember for all that were involved … Now stay tuned for the highly anticipated Summer SLAM Series kicking off June 27th, 2015. Check out extremekayakfishing.com for more information. A special thanks to the sponsors for making it all possible: 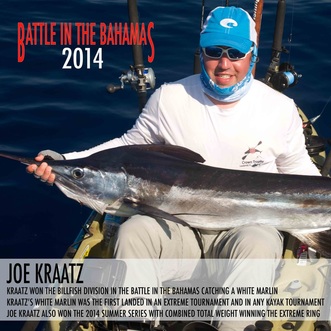 Two of the anglers competing in the inaugural Extreme Kayak Fishing Battle in the Bahamas tournament Friday and Saturday had a lot more excitement than they anticipated.

Joe Kraatz caught a white marlin Saturday morning fishing off Lucaya. While Kraatz was releasing his fish, Matt Eckert was fighting an estimated 500-pound blue marlin. Eckert reeled the leader to the rod tip of his 50-pound outfit numerous times, making the catch official, but he continued to fight the big blue for 11 hours, until the line broke.

Joe Settembrino of Hillsboro Inlet Live Bait, who supplied the nearly 40 anglers with live pilchards and goggle-eyes, was in his center console watching the anglers fight their marlins, both of which ate goggle-eyes along a dropoff where the depth went from 100 feet to 1,100. Settembrino said Kraatz, whose white won the billfish division and who also had the biggest dolphin of the tournament, hooked the marlin on his first drop with a stinger rig and a 12-inch wire leader. He needed about an hour to land the white.

Eckert, who won a four-day stay at Flamingo Bay Resort for his blue, was hooked up at the same time, "but he never knew what he had until it jumped an hour into the fight," Settembrino said, adding that the blue towed Eckert 15 miles into 3,000 feet. "He had the fish around his boat for four hours, he just couldn't get it close enough to grab it."

Brian Nelli won the tournament and $5,000 for a total weight of 75.2 pounds. He also won the biggest pelagic division to earn another $1,000 and a paddle board from Adventure Sports, Don Miley was second at 35.9 and won a Hobie kayak from Nautical Ventures. Drew Mixon was third at 32.7 and also won a Hobie kayak.